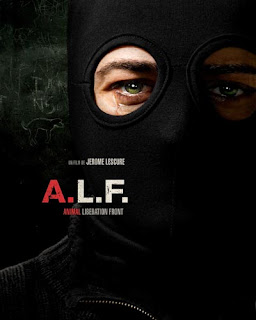 World Premier of the amazing french feature film, A.L.F. (Animal Liberation Front), by Jérôme Lescure! The producer will be flying in from France to do a Q&A. You do not want to miss this once-in-a-lifetime event!
This is a benefit for Victor and Kellie, as well as Jordan Holiday. Victor is currently serving a five year prison sentence for an attempted mink release in Iowa. He and his wife, Kellie Vanorden, both pleaded guilty to "releasing an animal from an animal facility and attempted third-degree burglary." Kellie has just finished serving her 60 day sentence in jail. Currently, Victor is trying to get paroled (i.e. get his sentence reduced considerably as well).
Speakers: -Gauthier Lamothe - (Producer) Q&A
- Lauren C. Regan (Executive Director, Civil Liberties Defense Center) Challenging NDAA (National Defense Authorization Act) and the AETA (Animal Enterprise Terrorism Act).
- Adriana Pope (former AETA4 defendant) Update on Jordan Holiday, and Victor & Kellie's case
Suggested Donation: $10
All money raised will go directly to their legal funds.
Pubblicato da ma alle 13:27